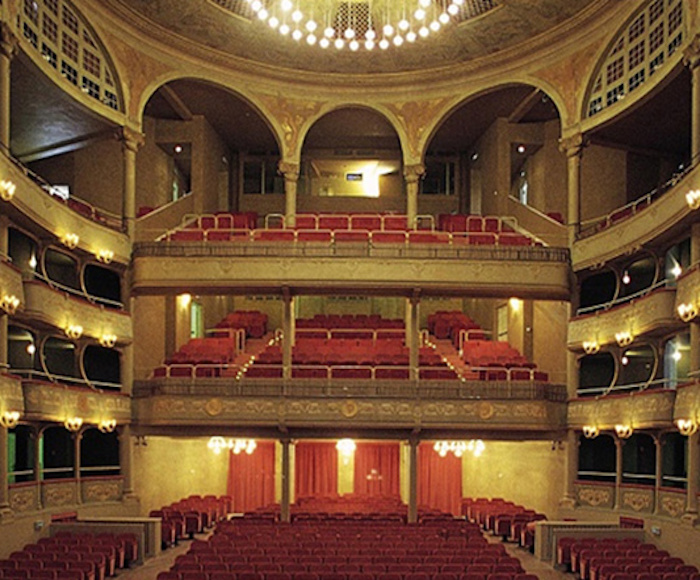 Malibran Theatre is best known for its importance in the opera field which had in the seventeenth and eighteenth centuries, when it was known as the Teatro San Giovanni Grisostomo. It was designed by Tommaso Bezzi at the behest of the brothers Vincenzo and Giovanni Carlo Grimani and was inaugurated during the carnival of 1678 with Vespasian Carlo Pallavicino. Quickly he became the main, the most luxurious and the most extravagant Venetian stage. Were set up sumptuous works and were performing high-level singers, such as Margherita Durastanti, who was the first woman between 1709 and 1712. During his heyday were active at this theater great composers such as Charles Francis Pollarolo, Alessandro Scarlatti and Georg Friedrich Händel. From the 30s of the eighteenth century for the San Giovanni Grisostomo began a slow and inexorable decline, however, he managed until the middle of the eighteenth century to stand up to all Venetian theaters. In 1737, when Carlo Goldoni was put to the direction of the Venetian stage, they began to be represented in prose works (among them many were his plays). Subsequently, due to its large size the Grimani family decided in 1755 to open a smaller theater, the San Benedetto. The opening of this new stage caused the end of the hegemony of San Giovanni which, once passed into the background, saw the operatic repertoire rappresentatovi decrease slowly. A French occupation followed by Venice, was among the few Venetian theaters to not have to be closed. In 1819 it was sold to John Gallo, who restored it in 1834, renaming it the first time Teatro Emeronittio (as open both day and night) and then a second time, in 1835, Teatro Malibran, in gratitude to Mary Malibran, the great singer who on April 8 of that year, in that theater, he starred La Sonnambula waiving his fee. In 1849 with the return of the Austrians in Venice, after the famous resistance of the lagoon city lasted almost a year, all the major theaters in the Veneto closed in protest, except Malibran. Having changed hands again in 1886, it was reopened in 1913, but after an opera season, was again closed due to some security issues. It was reopened yet again in 1919 and throughout most of the first half of the century was always active in the representation of operas, operettas and film shows. In 1992, the Venice City Council bought the theater and, having restored and enlarged , put it back in business. A arson followed that in 1996 destroyed the Teatro La Fenice, the orchestra of the latter stage passed provisionally to Malibran, where they were set up different shows that revalued the ancient Venetian theater, the second seat of the Phoenix became recently ( after the 2001 re-opening ). Remarkably rich in elegant ornamentation, five orders of thirty boxes and a wide empty stalls, and its plant distributed throughout the length presented a grandiose architectural structure.