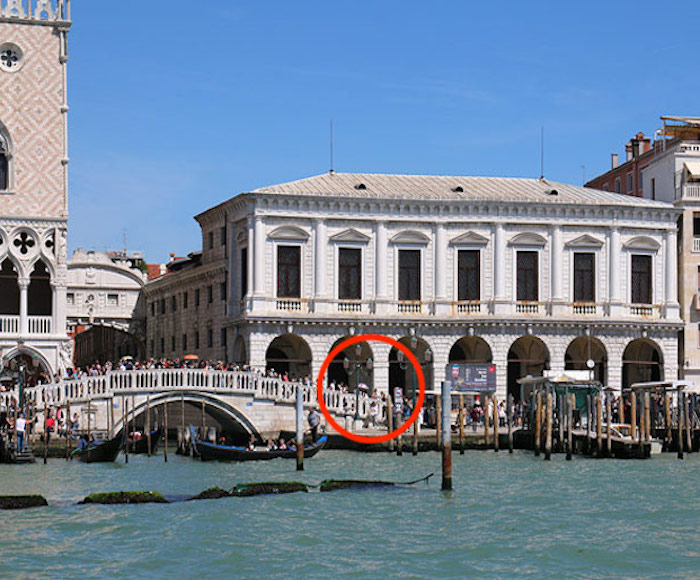 The Palazzo delle Prigioni (ancient Venetian "Prison Palace"), united to the Ducal Palace by the famous Bridge of Sighs, which crosses the Rio di Palazzo, is the work of the architect Antonio da Ponte, who began, starting from 1589, the construction begun by Giovanni Antonio Rusconi in 1563; completed by Antonio and Tommaso Contino around 1614, it was called to partially substitute the prisons of Palazzo Ducale. While the inmates were forced into the "chambers" placed along the Rio or facing the inner courtyards, the three rooms overlooking the Riva degli Schiavoni and the San Marco Basin housed one of the oldest magistrates of the Republic of Venice (attested from the middle of 13th century), the Lords of Night at the Criminal. They, in number of six to represent the districts of the city, had not only surveillance and police duties, with vast skills, but also judicial functions, which included the instruction of trials and the conduct of interrogators of defendants and witnesses. In the eighteenth century the aforementioned premises were used as a prison infirmary and a shelter for all those suspects and suspects who presented themselves spontaneously to justice. Here, during the Austrian domination, Niccolo Tommaseo and Daniele Manin were also relegated (as plaques still visible today), then taken from the cell on March 17, 1848, following the popular uprising, to be called to form the provisional government of the city. Access to the Hall: We inform that access to the hall is only possible by stairs. There is no elevators. It is suggested to avoid choosing this place for those with mobility problems.