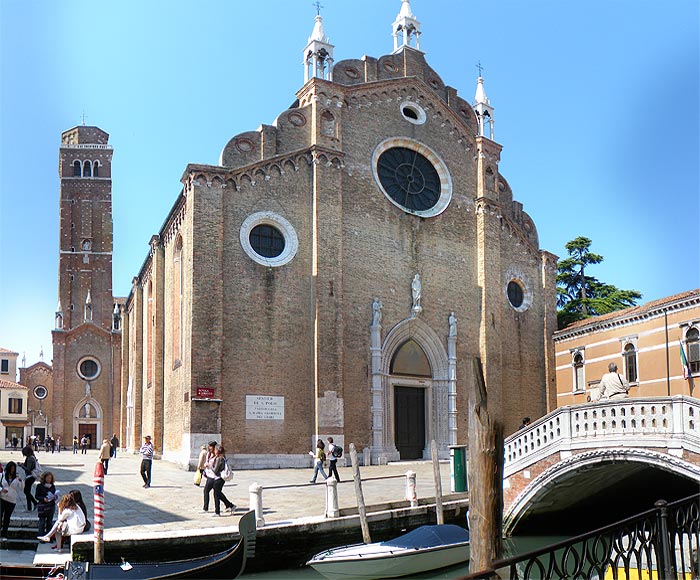 Santa Maria Gloriosa dei Frari surely is one of the bigger churches in Venice and an important Franciscan Architecture's example.
Francescan friars got the land in 1250 by doge Jacopo Tiepolo and immediately built a little church with an opposite orientation compare to the modern one. Santa Maria Gloriosa dei Frari, as appears nowadays, dates back to the middle of fourteenth century and got its model from SS. Giovanni e Paolo Church, that is in San Marco's Sestiere. At its side raises the bell tower, one of the highest of entire Venice, built in 1396. Facade is characterized by a pointed door and by the magnificent statue of redentore by sculptor A. Vittoria.
Interior has three naves with a latin cross plan and keeps important masterpieces of Venetian art. On the main altar is L'Assunta by Tiziano, on Pesaro altar is Martirio di Santa Caterina by Jacopo Palma il Giovane; while Pesaro Chapel keeps La Vergine col bimbo, putti musicanti e santi by Giovanni Bellini (1488). Moreover Santa Maria Gloriosa dei Frari keeps unique sculptures as wooden San Giovanni Battista by Donatello, monuments of Jacopo Marcello and Beato Pacifico.